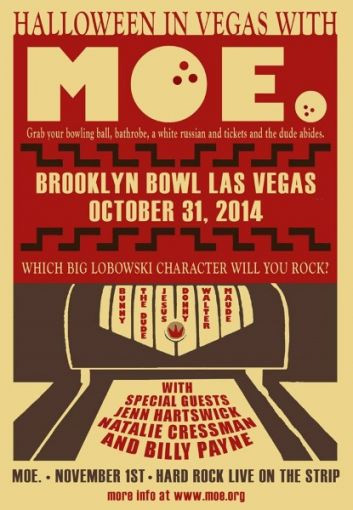 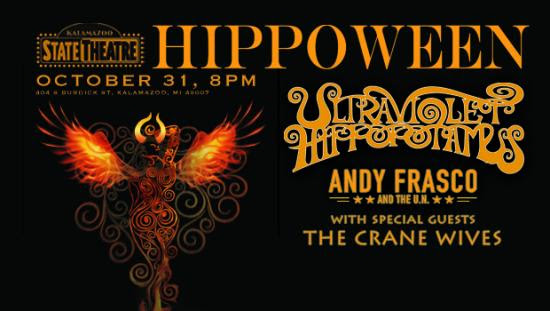 From UVHippoMusic.com
“After our shows on Halloween night and the first weekend of December, we will be taking our first break ever from touring and performing on the stage. In case you missed our announcement a few months back, we will taking an indefinite break starting this winter. We have no time table in mind or determined length of a break, but will definitely be making a return when we are ready. With that in mind, these three shows will be the last times to catch us for a while.

Halloween night we will be making our first appearance at The State Theatre in Kalamazoo, MI. Joining us on the stage for the night will be a horn section led by Funktion’s Terrance Massey. Opening up the show will be the fellow Grand Rapids folk band, The Crane Wives. Also entertaining the crowd for a while will be the most rocking blues band we’ve ever played with, Andy Frasco and the U.N. from Los Angelas, CA. Many of our fans have been discussing and planning on dressing up as a Hippo song or a theme from one of our songs. We fully endorse and encourage our all people attending this show to follow suit since this is totally awesome. If you don’t want to dress up as a UV Hippo theme, just dress up anyways, it is Halloween night!

The first weekend of December we are playing Friday night in Grand Rapids at The Intersection and Indianapolis at The Vogue the following day. Both nights will be An Evening with meaning everyone that attends will be getting three full sets of Hippo each night! Both of these cities and both of these shows mean a lot to us. It is the culmination of 10 years of non stop work and 6 years of non stop touring. We would love to see all of your beautiful faces at both of them dancing in front of us. Make a weekend of it!” 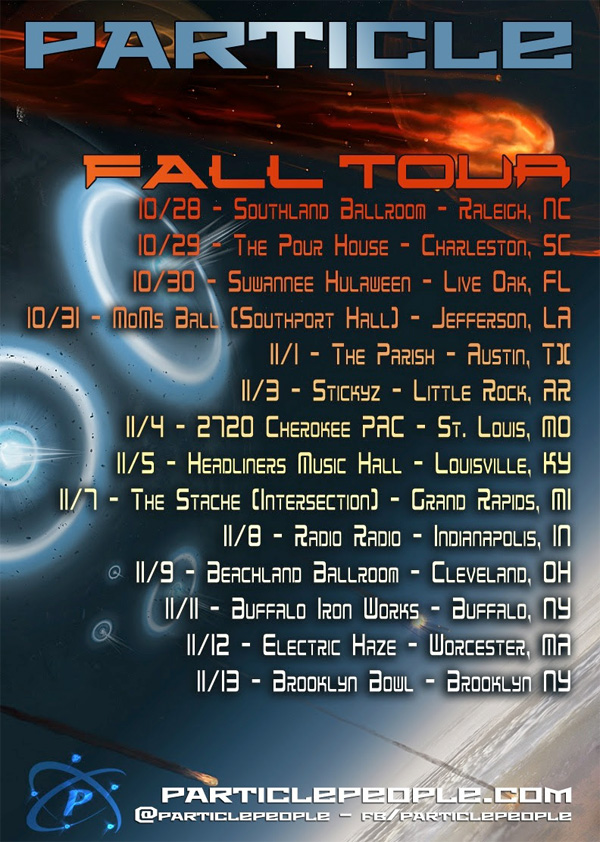 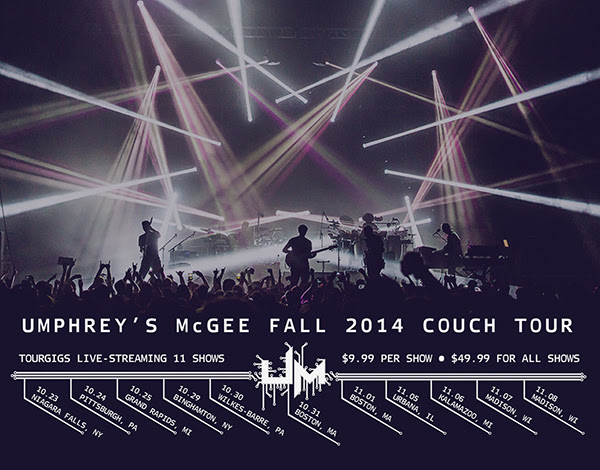 From Umphrey’s McGee
“The fun continues with live Umphrey’s McGee Fall 2014 Couch Tour webcasts of the next 11 shows with our friends at TourGigs. Featuring multiple camera angles paired with a crisp soundboard feed, we will put you squarely in the action… from the convenience of your couch. To give you maximum viewing flexibility, we will be replaying each show for 24 hours following each performance.

Individual shows are $9.99, which will include the 24 hour replay. But to reward the UM faithful, we are knocking HALF OFF the total cost so you can enjoy all 10 pay-per-views for only $49.99! In addition, we will be offering UMLive.com audio bundle options. And for your unflinching loyalty over the years, UM show #2000 from Madison is on us (i.e. free).” 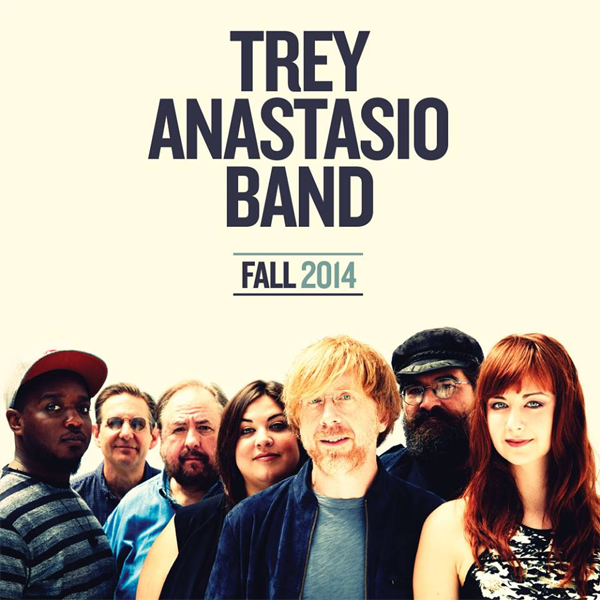 From Trey.com
“Trey Anastasio Band’s new album, Paper Wheels, isn’t due out until early 2015, but the group will be previewing some of the new songs during its 2014 Fall Tour. The run will kick off on November 28 (the day after Thanksgiving) at the Aragon Ballroom in Chicago and include two-night stands at the 9:30 Club in Washington, DC, the Orpheum Theatre in Boston and New York City’s Beacon Theatre.

Fans can listen to (and download for free) “Bounce,” a song from Paper Wheels, at Trey.com. While much preparation went into Paper Wheels in terms of demos and rehearsals with TAB, the album was recorded in less than a week at The Barn, Anastasio’s reconstructed barn-turned-rehearsal/recording studio located outside Burlington, Vermont. Inspired by the immediacy of Stax-era recordings, Anastasio and his band mates recorded the songs live, playing and singing together in one room and often requiring no more than one or two takes.

Paper Wheels was produced and engineered by Bryce Goggin, who helmed several Phish albums and has also partnered with Anastasio on previous solo projects, and mixed by Elliot Scheiner (Steely Dan, Van Morrison).” 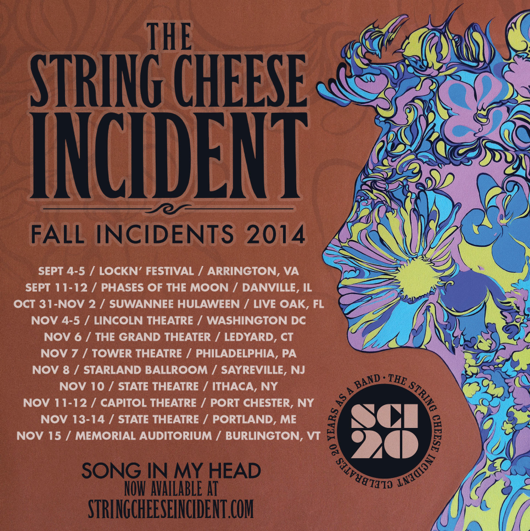 From StringCheeseIncident.com
“The String Cheese Incident’s 2014 Fall Incident Tour is now on sale at SCI Ticketing and various venue outlets. The band is thrilled to be heading back to the East Coast, playing several venues for the very first time, as well as towns they haven’t played in nearly a decade. Tickets are selling fast, so plan your next Incident now!” 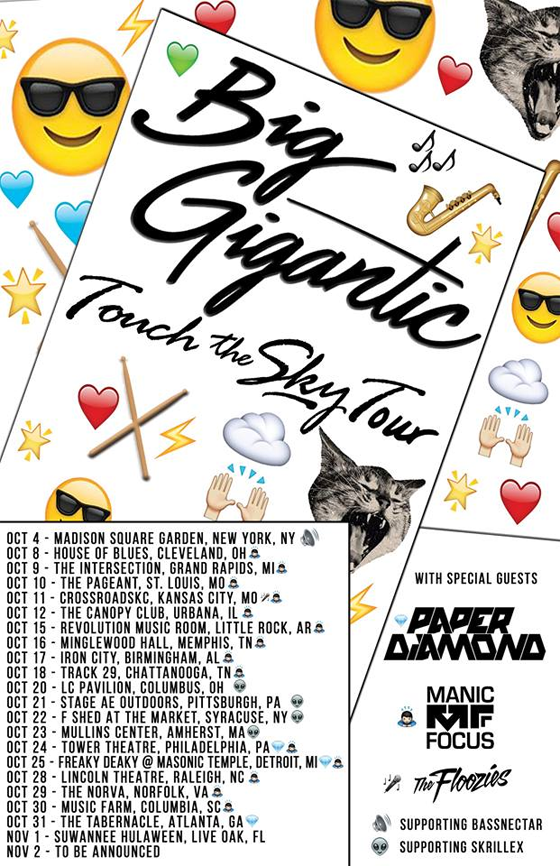 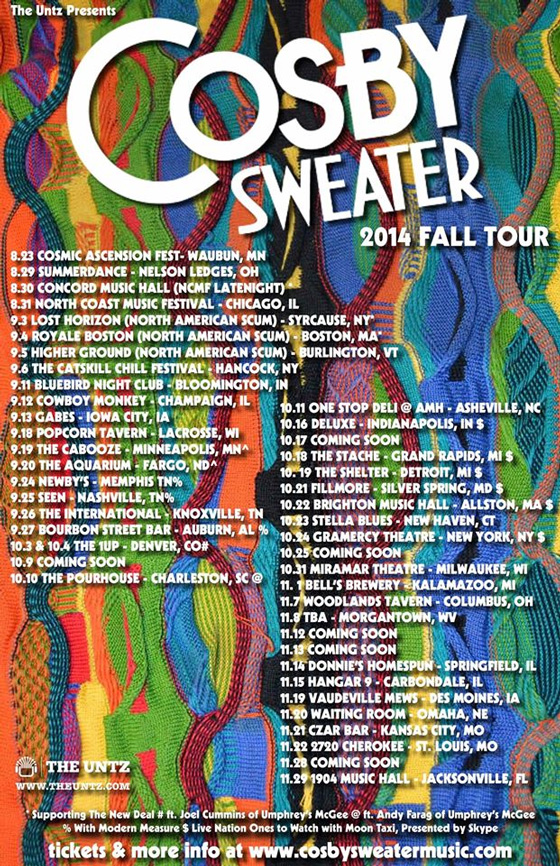 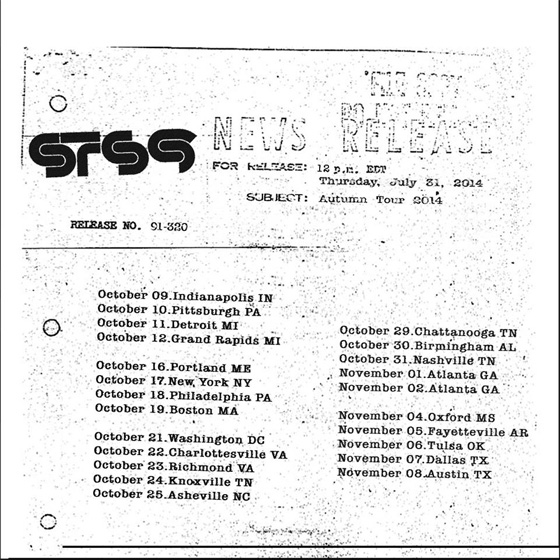 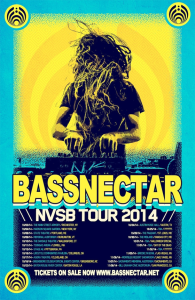 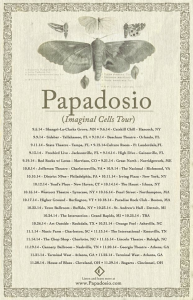 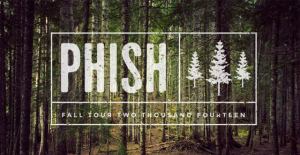 “There’s a reason Phish’s Summer trek only takes the band as far west as Commerce City, CO (where Phish will wrap things up with a trio of Labor Day weekend shows). The band will kick off a 12-date Fall tour that will take them to seven cities in the west beginning October 17 with its first-ever show at Matthew Knight Arena in Eugene, OR. Phish will play two consecutive nights at Santa Barbara Bowl (October 21 & 22), a venue Phish first played supporting Santana in 1992, and its first show at Los Angeles’ Forum since Valentine’s Day 2003. The tour will conclude with Phish’s first shows at the MGM Grand in Las Vegas. The three-night stand begins on Halloween night.
An online ticket request period for the Fall Tour is currently underway at http://tickets.phish.com/ and will end Sunday, August 3 at midnight ET. Tickets will go on sale to the general public beginning August 7. For complete ticketing details, please visit phish.com.”