“As an archivist and Dead Head, this boxed set is about as exciting as it gets. Musically, it features five exhilarating, dynamic nights in the summer of 1978. The sound quality is impeccable, as would be expected from Betty Cantor-Jackson’s always-pristine recordings. The rarity of the first three nights, and the hall-of-fame pedigree of the last two, makes this one of the most astonishing Grateful Dead releases ever. Collaborating with the owners of these tapes, we are very pleased to see these important historical documents returned home and now shared with the world.”
– David Lemieux 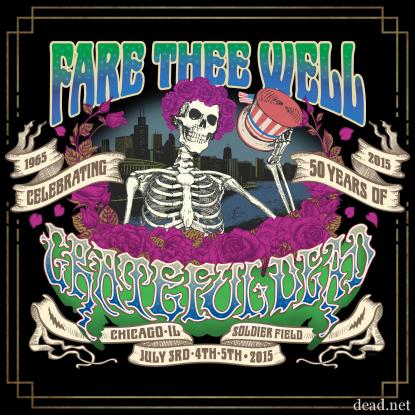 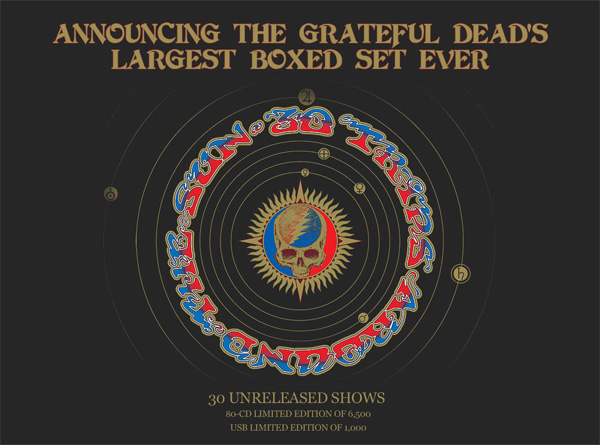 From Dead.net
“We are more than pleased to announce the Grateful Dead’s most ambitious release ever: 30 TRIPS AROUND THE SUN . Available as both an 80-disc boxed set and a custom lightning-bolt USB drive, the collection includes 30 unreleased live shows, one for each year the band was together from 1966 to 1995, along with one track from their earliest recording sessions in 1965. Packed with over 73 hours of music, both the boxed set and the USB drive will be individually numbered limited editions. Both are now available for pre-order exclusively at Dead.net and scheduled to be released on September 18th.

The 80-disc boxed set is individually numbered and limited to 6,500 copies, a nod to the band’s formation in 1965. Along with the CDs, it also includes a gold-colored 7-inch vinyl single which bookends the band’s career. The A-side is “Caution (Do Not Stop On Tracks)” from the band’s earliest recording session in 1965 with the B-side of the last song the band ever performed together live, “Box Of Rain” recorded during their final encore at Soldier Field in Chicago on July 9, 1995.

The box also comes with a 288-page book that features an extensive, career-spanning essay written by Nick Meriwether, who oversees the Dead archives at the University of California, Santa Cruz, along with special remembrances of the band submitted by fans. Also included is a scroll that offers a visual representation of how the band’s live repertoire has evolved through the years.

The USB drive version will be shaped like a gold lightning bolt with the Grateful Dead 50th anniversary logo engraved on the side. The drive includes all of the music from the collection in both FLAC (96/24) and 320 KBPS MP3 formats and is an individually numbered limited edition of 1,000 copies.”