Instrumental trio Consider the Source, the planet’s preeminent Sci-Fi Middle Eastern Fusion ensemble, has announced their first studio release in four years. The three disc collection, World War Trio, will be released separately. With their patented Middle Eastern sound and dazzling displays of furious virtuosity taking a backseat, the first of the three, “Put Another Rock in That Bag”, will debut October 31st, 2014 as an EP boasting a unique compositional approach. The second and third discs will be released as a double album in Winter 2015, but the initial EP will feature a short “Making of World War Trio” documentary with previews.

Recorded at Bunker Studio in Brooklyn, NY and funded by a successful Indiegogo campaign, World War Trio spans three discs and a universe of sonic territory. The compilation will be their first studio recording with drummer/percussionist Jeff Mann, whose recent addition has supercharged the band’s chemistry. The release perfectly encapsulates the trio’s masterful improvisation, frantic energy, and unique blend of progressive rock and Middle Eastern music that has brought them worldwide acclaim.

Disc one, “Put Another Rock in that Bag”, is an epic twenty-five minute work divided into six parts. Compositionally driven and showcasing their songwriting prowess, the EP is a departure from their usual style. It features a section written by Jan Zehrfeld of Panzerballett, with whom the band toured Germany and the US. Consider the Source will premiere the work on Halloween in Albany, NY with a full performance of the EP, launching a tour that will lead to the release of discs two and three in Winter 2015. This double album will highlight the multi-faceted diversity of Consider the Source, with authentic instruments from around the world, acoustic songs, ballads, and improvised pieces.

“Founder, writer and drummer of Soulive for over 15 years, Alan Evans proudly presents his newest creation the Alan Evans Trio; an inspiring and fresh organ trio lineup. Enlisting the support of good friends and talented players Danny Mayer on guitar (On the Spot Trio), and Beau Sasser (Melvin Sparks, Akashic Record) the trio’s sound proves hard driving and groovin’ with dark funky rhythms and blues lick solos. Alan Evans Trio opens a window into another side – an emotional introspection, as dark as it is powerful. Their passionate progressions emanate an electrified, smoky, 70s-era CTI Records zeitgeist.
Together as the Alan Evans Trio, Alan, Danny and Beau share an energetic on-stage chemistry, a love for album recording, and taking their music out on the road. Armed with an abundance of newly inspired songs, Alan is taking the band on tour across the US, Japan and Europe in support of their debut album Drop Hop, released in April 2012, and now available via iTunes and on vinyl.
Mention the name Alan Evans to a room full of music lovers, and you will get a consensus nod at one of the most celebrated and tenacious drummers in the jazz, funk, and soul scene. A producer, recording engineer, guitarist, percussionist, vocalist and writer, Alan’s repertoire of skills have been perfected with more than a decade of dedication.
“I’ve known for a long time what my purpose is this time around. All I want to do is try to make people happy with what makes me and my family happy… Music,” says Alan about his new trio project.
For Alan, the idea of Alan Evans Trio hatched soon after he transitioned from Playonbrother Studios in Hatfield, MA to his own home recording studio. Alan then enlisted the ingenious talent of both Danny Mayer and Beau Sasser for the project.
Alan had met Danny Mayer first as a Soulive fan, but then connected on a musical level when his band, On the Spot Trio (OTS), came out to Playonbrother Studios to record their first album, with Alan at the helm as producer. Alan had played gigs with Beau Sasser for some time, and had a great deal of respect for Beau’s masterful proficiency on the organ, and knowledge of the history behind the instrument.
Alan muses of Alan Evans Trio’s beginnings, “This is when it all started to come together for me. Danny was straight killin’ it, playing guitar exactly the way I would. I knew that Danny and Beau together would be scary.” Danny and Beau both consented to a recording session with one another. Alan set up the mastering date, began thinking about a release date, tour, and even began designing the website and logo.
Passionate and inspired, Alan cranked out Drop Hop in a couple of days. He recorded bass, drums, guitar and then emailed Beau and Danny the tune of the day to learn for the session. “It was all coming together so well, I could hear the entire album in my head. I can honestly say, this is the first album I’ve ever recorded that came out exactly the way I dreamed it.”” 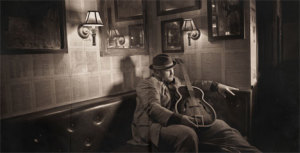