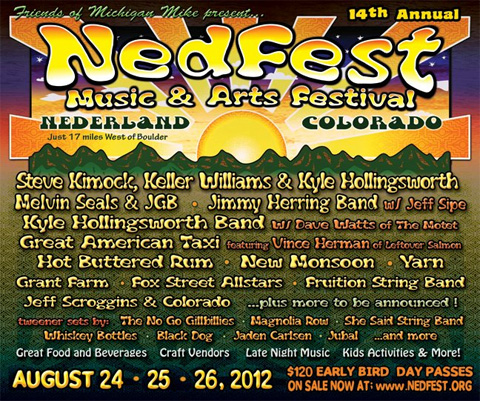 “The 14th annual NedFest – returning August 24-26, 2012 to the Jeff Guercio Memorial Ballfield on the banks of Barker Reservoir in the beautiful high-country town of Nederland, Colorado – is proud to officially announce its artist lineup. Tickets are available now at NedFest.com. With a dependable yearly lineup, partnerships with local breweries, tickets capped at 2,000 and a true scene of devotees that returns year after year, NedFest continues to keep the mountain town’s homegrown musical legacy alive.

When festival founder “Michigan Mike” Torpie passed away in November 2011, there were a lot of doubts in the community about what was going to happen to NedFest. Eventually, a group of his friends and long-time festival volunteers got together and asked his family what they would like to do with the festival. The Torpie family did not want to make money from Mike’s death so a non-profit organization named “Peak to Peak Music Education Association” was formed. The non-profit intends to help in the education of music for children. The Torpie family liked the idea and gave their blessings to continue NedFest.

A pair of late-night shows at the First Street Pub, which have become legendary over the years, also take place Friday and Saturday nights of the festival with top Boulder acts Jet Edison and Smooth Money Gesture.”