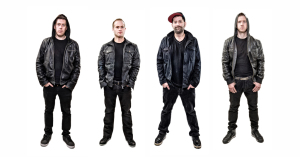 Marc Brownstein is one of the busiest musicians on the planet. Weather its playing five night New Year’s runs in New York City, hosting the annual Camp Bisco, or touring with one of his many side projects, Marc’s appetite for growing as musician appears to be insatiable. He is currently on tour with fellow Disco Biscuit member Aron Magner as part of Conspirator and they make their first appearance in Indianapolis this Sunday February 24th at The Vogue in Broad Ripple. The band also recently released a new EP titled ‘Unleashed’ and it’s available for download HERE.
This past week Marc took some time to answer a few questions about how this tour has been, and about some of his favorite places to play in the Midwest.
-In general, how has this tour with Conspirator been so far?

MB: The tour has been amazing. I’m almost forty years old. I’m going to be forty next month, and I mean it’s so amazing to be able to keep this thing going. When we got together in 2004 we didn’t expect really, to become a “band,” more of a project. We didn’t take it very seriously as far as writing new music, continuously putting out new music, we just didn’t have the time. Now that we have more time to dedicate to this we’ve been able to visit a million new places which is really exciting.

We’ve never played Indianapolis as far as I know, I know we played Bloomington once. We’ve been able to come out more and more and now were making our third trip to Minneapolis, fifth or sixth trip to Chicago, second to Grand Rapids, and it seems to create this ripple affect where maybe one show you go to there’s 200 people, next time 400. You just see it double out and double out, it’s just been amazing the whole thing.  Going along with Break Science, they bring a whole lot to the table too, a lot of fans.

We’re on tour with really great people. People who are inspiring to us as musicians and you know that’s what you want. You want to surround yourself with people that will make you a better person, better musician, better producer, all of that. I think besides a couple dates in the deep south we’ve never been to before, we’ve had a whole lot of packed houses.

-One thing that comes with newer bands or projects is playing in smaller venues. As someone who has played at venues the size of Red Rocks, what are some of the things you like and dislike about smaller venues ?

MB: Well, what’s been nice this time (tour) is that we have the luxury of playing amphitheaters and arenas throughout the course of the year. And, it’s not really an ego thing now. We can come back around having been successful before and to be able to enjoy what’s great about it, rather than always wanting to be bigger.

The first times it’s always about wanting to get out of clubs, coveting thy neighbor, it was about always wanting to be bigger, more successful, and now you come back and you’re in small clubs and the energy, being able to control this energy with just 200 other people is pretty cool. Learning how to control the energy of various sized crowds has been something fun to discover.

One of the things though, sometimes the stage can be a little too small in smaller venues. Sometimes you wish you had a little more space to spread out, but even so, some of these smaller clubs still have exceptional setups, small theater type settings that are wonderful to play in.

-If you had to pick your favorite place you’ve ever performed at, what would it be?

MB: Well, how can you really do that? I mean we played in Mexico on the night the Mayan calendar came to an end, but is that better than playing at Red Rocks?

-What about some of your favorite places to play at in the Midwest?

MB: Deer Creek was pretty cool. It was really awesome, we played there the first night of the Identity tour and it wasn’t packed or anything, but still an amazing place to play. Oh! There’s a little amphitheater in Indianapolis that was one of my favorite little amphitheaters to play, on the White River?

MB: Ah, yes… Incredible venue. Had a headliner tour go through there once, great place. But, is that any better than the House of Blues in Chicago? Ya know?

-I bring up Midwest venues because the first time I ever saw you perform was at one of my favorite places in the world, the Rothbury Festival in Michigan in 2008. How was performing at that festival?

MB: “Rothbury was just ridiculous, in the best way possible. For me it was more about getting off the stage, being able to walk through the forest, that’s what was special about that place. They just have it set up to where it’s just like, a magical wonderland. The stages, the lights, and the field are great but really they’re no better than what goes on at Camp Bisco, but what Rothbury did in that forest, the quote on quote “Electric Forest,” if you will, isn’t being done anywhere else outside of the Fuji Rock festival, which is where I feel like a lot of the inspiration for Rothbury’s setup came from.

You wanna talk about great places to play, Fuji Rock was over the top, one of the best festivals I’ve ever played at. But yea, Rothbury, Double JJ Ranch, can’t beat it. Just year after year, whether it’s with the Biscuits, Conspirator, this year with Suckerpunch, and hopefully next year swing back around and bring the Biscuits back, or Conspirator, either one. You just have to be there.”

Conspirator’s tour ends this Sunday in Indy and after a short break they head out west for a short run in Colorado and California. Marc will also be doing a handful of shows with his other project Suckerpunch, most notably at the Electric Forest festival in Rothbury Michigan June 27-30th along with three nights of the String Cheese Incident.

“Founder, writer and drummer of Soulive for over 15 years, Alan Evans proudly presents his newest creation the Alan Evans Trio; an inspiring and fresh organ trio lineup. Enlisting the support of good friends and talented players Danny Mayer on guitar (On the Spot Trio), and Beau Sasser (Melvin Sparks, Akashic Record) the trio’s sound proves hard driving and groovin’ with dark funky rhythms and blues lick solos. Alan Evans Trio opens a window into another side – an emotional introspection, as dark as it is powerful. Their passionate progressions emanate an electrified, smoky, 70s-era CTI Records zeitgeist.
Together as the Alan Evans Trio, Alan, Danny and Beau share an energetic on-stage chemistry, a love for album recording, and taking their music out on the road. Armed with an abundance of newly inspired songs, Alan is taking the band on tour across the US, Japan and Europe in support of their debut album Drop Hop, released in April 2012, and now available via iTunes and on vinyl.
Mention the name Alan Evans to a room full of music lovers, and you will get a consensus nod at one of the most celebrated and tenacious drummers in the jazz, funk, and soul scene. A producer, recording engineer, guitarist, percussionist, vocalist and writer, Alan’s repertoire of skills have been perfected with more than a decade of dedication.
“I’ve known for a long time what my purpose is this time around. All I want to do is try to make people happy with what makes me and my family happy… Music,” says Alan about his new trio project.
For Alan, the idea of Alan Evans Trio hatched soon after he transitioned from Playonbrother Studios in Hatfield, MA to his own home recording studio. Alan then enlisted the ingenious talent of both Danny Mayer and Beau Sasser for the project.
Alan had met Danny Mayer first as a Soulive fan, but then connected on a musical level when his band, On the Spot Trio (OTS), came out to Playonbrother Studios to record their first album, with Alan at the helm as producer. Alan had played gigs with Beau Sasser for some time, and had a great deal of respect for Beau’s masterful proficiency on the organ, and knowledge of the history behind the instrument.
Alan muses of Alan Evans Trio’s beginnings, “This is when it all started to come together for me. Danny was straight killin’ it, playing guitar exactly the way I would. I knew that Danny and Beau together would be scary.” Danny and Beau both consented to a recording session with one another. Alan set up the mastering date, began thinking about a release date, tour, and even began designing the website and logo.
Passionate and inspired, Alan cranked out Drop Hop in a couple of days. He recorded bass, drums, guitar and then emailed Beau and Danny the tune of the day to learn for the session. “It was all coming together so well, I could hear the entire album in my head. I can honestly say, this is the first album I’ve ever recorded that came out exactly the way I dreamed it.””

8 shows, 6 cities, 24 hours. On June 27th The Flaming Lips will travel from Memphis, TN to New Orleans performing a Guinness World Record breaking eight shows in one day. The record is currently held by Jay-Z who performed seven shows in seven cities back in 2006. The shows will be streaming live as part of the O Music Awards.

GetGrounded.tv first day of coverage from Occupy Wall St in NY. We will be putting out daily short videos on the network, and one large documentary down the road.

G. Love and Samantha Stollenwerck talk about “Ooh Dee Ooh,” a track they donated to the Patagonia Music Collective to support Surfrider. Visit www.Patagonia.com/music to buy a song and help the environment. Edited by Greg Bitsky.

The Disco Biscuits Studio 4 Sessions – Chapter One: “An Old New Direction”
“We’re especially excited to premiere the first in a series of episodes documenting the sessions for our next studio album! The album is called “Otherwise Law Abiding Citizens” and will be out this summer.

The episodes were directed by our friend Jesse Borrell of NoCoast.tv, whose first Biscuits claim to fame was his contest-winning Konkrete video that premiered at Inferno 2010. We hope you enjoy the footage and the sneak peak at some new tunes – we’re so happy to share them at last. More to come!” From DiscoBiscuits.com

Featuring “We Like To Party” & “Portal To An Empty Head.” All Music Produced & Written By The Disco Biscuits. Engineered By Phil Nicolo & Ian Cross At Studio 4 In Conshohocken, PA. Mixed By Benji Vaughan. This video was Directed/Edited By Jesse R. Borrell. Photography/Videography By Jesse R. Borrell & Marc Brownstein.