“Since our journey of releasing live shows began, we’ve crossed multiple platforms and explored many different ways of delivering these recordings to you. A little over a year ago, we tried our first subscription-based model (Drip), which provided a space to not only save a lot of dough, but listen to lots more Papadosio.”

“Now, here in the great 2016 – we are excited to announce that we will be offering a new subscription service right here on Bandcamp that will not only give you access to our entire live catalog, but it comes with a dedicated Bandcamp mobile app that will allow you to stream all the live Papadosio you can possibly take.”

“The coolest part though is that in honor of our recent 10 year anniversary, we still want to offer this new subscription for the same price as Drip, i.e. only $10/month! You will have access to every Live Show we have ever uploaded to Bandcamp and have plenty to look forward to as the year carries on.”

“After nearly every Papadosio show, somebody posts up in the back lounge of the bus and puts on some headphones and starts cutting up and mixing whatever just happened that night. Our hope with this new is to bring you even a little bit closer to that special spot where we get to check in and see what unfolded.”

“So whenever you’re ready, follow us to the Back Lounge, have a seat and lets tune in. Thank you all always for your support!”

“The Werks “Live at the Werk Out 2016”, showcases the band at their relentlessly funky best at their 7th annual namesake festival in Ohio. After a decade spent honing their sound, the bands trademark multi-dimensional jams are fresher than ever, backed by dynamic rock chops and soaring melodies. Enjoy over 2 hours of fan favorites, remixed and mastered for The Werks first official release in over a year.” 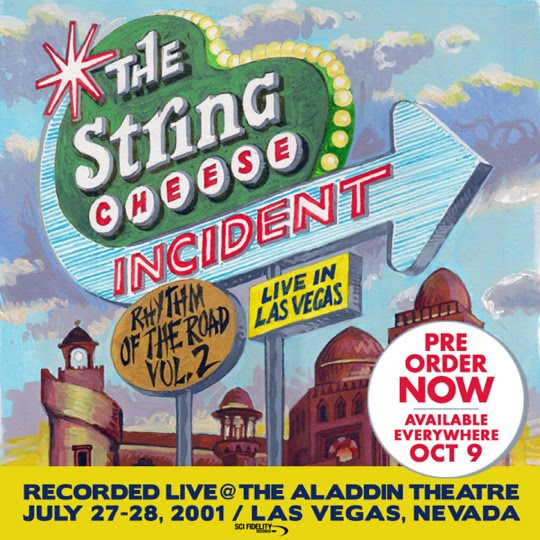 From StringCheeseIncident.com
“The String Cheese Incident is thrilled to announce the release of Rhythm of the Road: Volume 2, Live In Las Vegas – the second installment of SCI’s live archival series that highlights the band’s most celebrated concerts with re-mastered limited edition releases!

Live in Las Vegas features the best moments from SCI’s two night run at The Aladdin Theatre in Las Vegas in July of 2001. This 3-disc set includes fan favorites such as “San Jose” and “Howard”, as well as rare bust-outs like “SKAT” and more. The audio has been completely re-mixed and re-mastered, creating a listening experience that all fans are sure to enjoy!

To celebrate the release of Rhythm of the Road: Volume 2, SCI Fidelity Records is pleased to announce the Live In Las Vegas Pre-Order Contest. Beginning on September 8th, everyone who pre-orders the album through the official SCI online store will automatically be entered to win the following prizes:

In addition, 100 people who pre-order will be randomly selected to receive a signed copy of Live In Vegas! The album will be available in-stores and online beginning October 9th, 2015.” 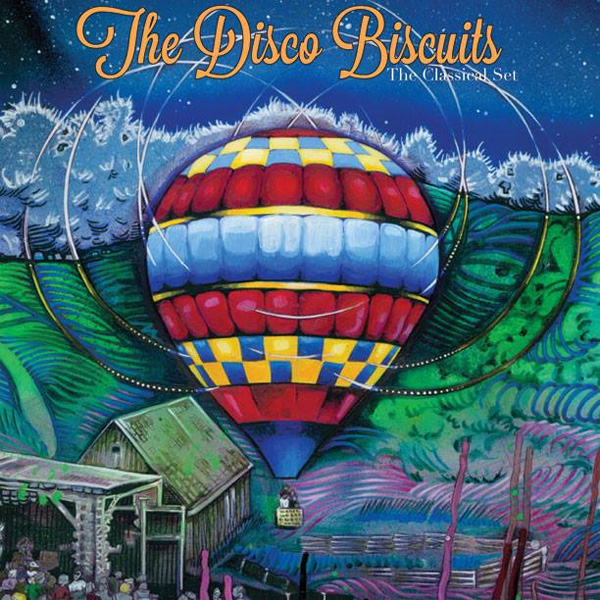 From Disco Biscuits
“On behalf of the entire Disco Biscuits organization, I couldn’t be happier to announce the official release of THE CLASSICAL SET….on vinyl (now available for preorder HERE ). This special afternoon show was performed on Aug 16, 2003 at a festival we put together in the mountains of Trade, Tennessee called “TranceMission.” The tracks consist of arrangements of some of the most famous classical pieces of music, mixed with some Biscuits classical-inspired originals. I vividly recall the band tearing through the sheet music of the conductor’s score and crafting our own unique four piece orchestration that still stayed true to the written music.

Though we have played some of these songs very rarely over the years, this is the only time we have performed them as one complete set, and that fluidity made it an instant fan favorite since the day it was first performed. An audience mic recording was the only thing available to document this performance…until now. Earlier in the year, the multi-tracked, grouped stems (individual recordings of each instrument) were discovered, and we knew immediately we had to have them polished for an official archive release. The stems were sent out for mixing and mastering to Jon Altschiller, who has the incredible talent of bringing live Biscuits performances back to life like he did with the releases Wind at Four to Fly, Rocket 3 and the TransFusion Radio series. The new mix was then sent out to one of the best mastering engineers in the country for vinyl, Scott Hull, who expertly de-noised and optimized the release for vinyl. This astonishing audio was then pressed to high quality, virgin 180g vinyl by RTI, Americas finest vinyl production facility pressing plant.

Why do I tell you all this? Because the results absolutely blew me away. I have listened to this recording many, many times, especially throughout the mixing and mastering process. We just wanted to get this release out there already. But when I sat down and heard the vinyl master for the first time, I was astonished. I couldn’t believe how captivating the recording was, and how immersed I became in the show; a show I had heard so many times before. There was new life to it. It was breathing. A portal back in time to that summer afternoon in 2003.

This limited edition, four side, official release has been set for November 28, but we are accepting pre-order reservations HERE that will ship out by mid-November. The release contains original artwork by Gwen AP, liner notes by Jon Lesser, a special bonus track on side 4, a download card redeemable for a free digital version of the album, and, for those who purchase via the pre-order before the end of October, a bonus item from our merch store.”

Roll over Beethoven…we’re rocking in 2 by 2.
-Aron Magner

From Umphreys.com
“Nearly three hours of music have been meticulously stitched together to deliver you a new listening experience. This year’s offering features classic UM staples alongside two stand out covers (Beck, moe.) as well as appearances by Joshua Redman and Mad Dog’s Filthy Little Secret Horns. Hall of Fame: Class of 2013 is available in a smattering of digital formats, from high resolution 24-bit ALAC to MP3. We’ll also be pressing a double 180-gram splattered LP set for you audiophiles and collectors. The vinyl set includes an MP3 download of the entire album.”

From Jimkata.com
“Jimkata has released their first official live album, ’10 More Songs!’, which documents the long miles and countless hours spent honing newer compositions and reworking old favorites. The album features 14 tracks recorded in 2012/2013 at many of their favorite New York venues, paying homage to their home state. 10 More Songs! chronicles the band’s evolution across their four studio albums from ‘07s fast-tempoed “Mind Crossing” to the dub-tinged “Greyhound” and sing-along fan favorites, “Chain Store” and “Night Shade” off Die Digital, as well as the unrecorded track “Soap”. The album is available NOW on iTunes at http://bit.ly/HNn003 and Spotify.

The four-piece is also back in the studio with Die Digital producer Jocko Randall to record the follow-up EP, “Feel In Light,’ due out in early 2014.“ 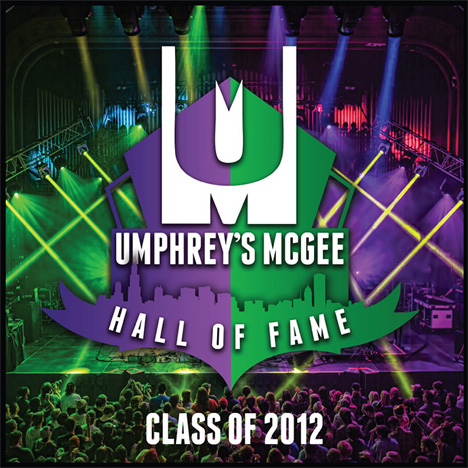 “Hall of Fame: Class of 2012 is finally here. You voted on the most noteworthy performances of the year, the votes have been tallied, and the master tapes are being compiled into an idealized 3+ hour “show” based on your favorites. The best of the best of 2012 is being edited and re-mastered for a plethora of digital, vinyl and custom options.

This year, we have decided to take this interactive experience a step further by crowdsourcing the creation of the HOF album. We are partnering with PledgeMusic to not only offer a wider variety of HOF offerings than ever before but also to give all pledgers at any level access to a special ‘pledger-only’ part of the site. There you will find exclusive updates throughout the process: you’ll be able to see videos, photos, and audio of the entire process of putting the Hall of Fame together.

Want a peek behind the curtain of the voodoo editing process? Ever seen vinyl being pressed at the plant? How about band members customizing the LP sleeves? Who knows, you might even get a few bonus tracks that didn’t make the final release or other goodies that are kicking around UM HQ! ::wink, wink:: Please take a few minutes to check out the offerings, support the cause and spread the word. The more participation we get, the easier it is to throw more content to all you pledgers! As always, thanks for lettin’ us do what we do.” 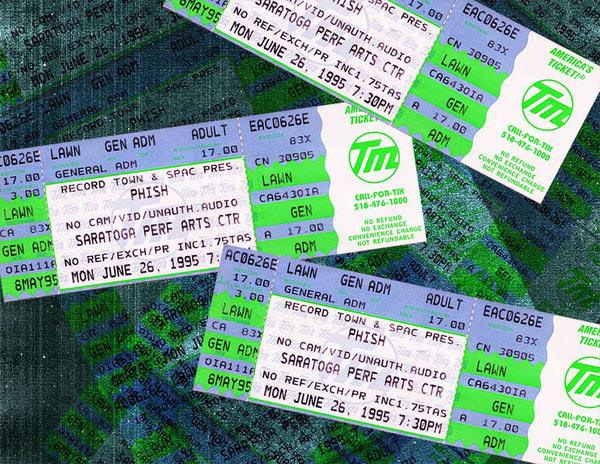